This video demonstrates some of the new features of the mechanism design tool SAM 7.0:

In order to better meet the needs of our customers we have introduced the concept of ANNUAL LICENSES next to the already existing PERPETUAL LICENSES.

It is now possible to obtain an annual license without any entry fee or obligation to continue after one year. Neither is there any automatic continuation of the license period. An annual license is always based on the latest available version of the software, so you are always up-to-date. 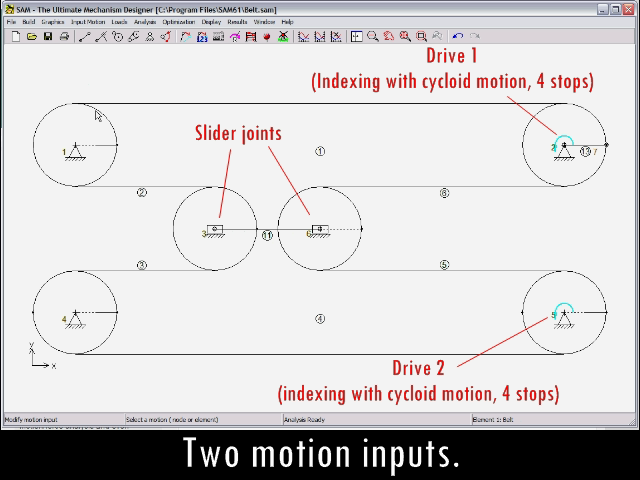 The following issues are solved in this update:

Optimization (Professional version of SAM only)

Taking the initial design/topology as a starting point one can for example further improve the quality in which the trajectory of a coupler point equals the target trajectory by changing the geometry of the mechanism within pre-defined ranges. Or one can minimize the peak or RMS value of the driving torque of a mechanism by adding a compensating mass and let SAM determine the optimal value of the mass and its position within the allowable range. Just as in the case of the trajectory optimization one can also specify a reference function and minimize the difference between the actual and the reference function. When designing for example fitness equipment one is generally seeking a predefined force as function of displacement.

The goal for optimization can be the minimization or maximization of a variety of properties (peak, RMS, average, ...) of the difference between the actual and the target behavior of a mechanism, such as:
Trajectory of a node (with of without prescribed timing)
Any motion or force quantity (as function of time or another quantity)

SAM seeks the optimum by modifying the following properties within user-defined ranges:

Geometry of mechanism
Element properties, such mass, spring constant, transmission ratio, ...
The optimization process in SAM is based on a two step approach, consisting of :
Exploration of the design space
Optimization of a specific solution

In previous versions of SAM the user interaction model was based on "Select action from menu or toolbar, then select item to apply action to", for example Delete Element followed by a selection of the element to be deleted. Many programs, such as Microsoft Office, use a different approach which is based on "Select an item and press right mouse key to see which actions can be applied to the selected item". In order to satisfy both experienced SAM users and novice users which are used to the Microsoft Office approach, SAM 6.0 supports both user interaction approaches.
Email ThisBlogThis!Share to TwitterShare to FacebookShare to Pinterest
Subscribe to: Posts (Atom)

What do the users say ?

What do the journals say?

What do the experts say?